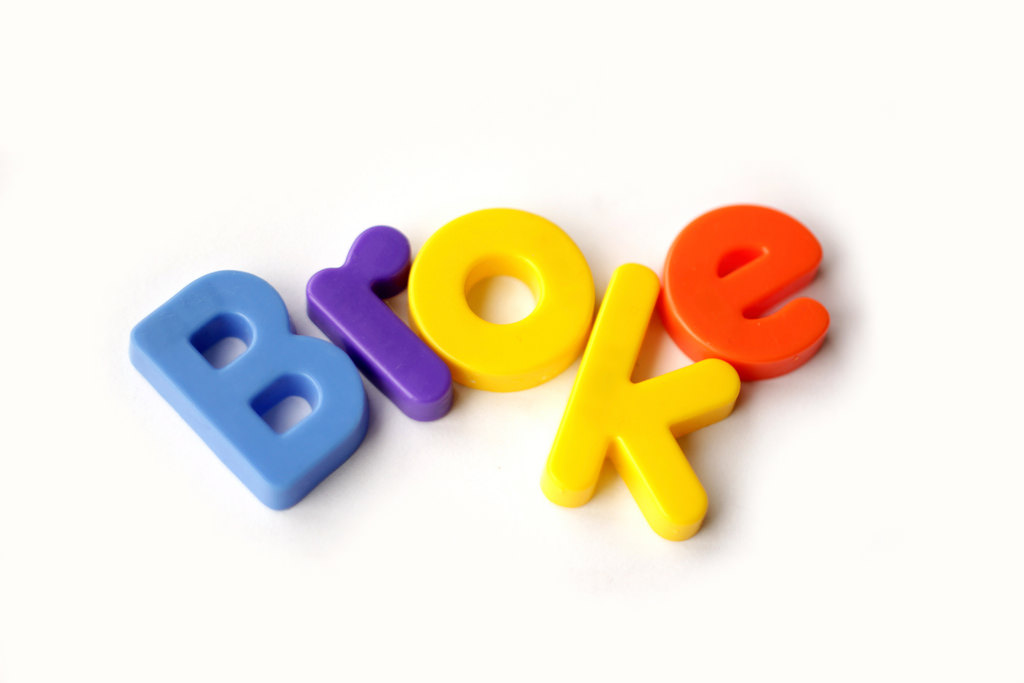 One of the key reasons that people often want to reinvent their lives is because of a lack of money. They say that money doesn’t buy you happiness, and to a large extent, that is true. However, a lack of money can certainly buy you misery. There are so many times I seem to be juggling finances when there’s not enough to go around – robbing Peter to pay Paul.

I wrote in my last post, The Leap of Faith, about the importance of looking beyond mere survival, to the point where you are actually thriving. And indeed that is absolutely pivotal to your long-term success. However, you can’t ignore the fact that you need to survive in the short-term, too.

The rich and those in the middle-class who have never been poor, have absolutely no idea how difficult mere survival can be when you have very little money. The often-quoted solution to money problems of “write a budget” is eminently sensible – but sometimes a budget only tells you just how deep the pile of crap is that you’re in – it doesn’t actually give you a ladder to help you climb out of it.

I can talk this about from experience. I have a degree in Accounting. I taught Accounting for 26 years, and that obviously included budgeting. I  can produce nicely laid-out budgets, that balance perfectly, virtually in my sleep. But they all tell you the same thing. Your income is X. Your expenses are Y. Your surplus or deficit is X – Y. If that number is negative, you have a deficit. You may have assets you can sell or access to money you can borrow in the short-term to get you by, but ultimately you can’t stay in a deficit position.

The Accounting teacher in me would then start lecturing on how the only way to cure a deficit is to either increase income or reduce expenses.

For most of my teaching career I taught in Decile 8 schools, so taught kids from reasonably wealthy families. The old middle-class teacher in me (back when I earned $NZ80,000 pa) would then happily advise that you should go through the expenses in your budget, splitting them into discretionary vs essential. I would then have suggested that my student goes through these expenses, line by line, removing discretionary expenses one by one until the deficit reaches zero. They should then keep on going to create a surplus, and push themselves into a thriving position.

I remember I would then tell my students that if they didn’t want to cut back on their luxuries, their only other option was to increase their income – get an extra part-time job. I never discussed with them what they should do if they were unable to find this magical “extra part-time job”.

The problem is, often when you are near the bottom financially, there are very few if any, discretionary expenses in your budget to cut. And finding, and being awarded, an extra better-paying job, is not as easy as walking in a door, either.

When you’re at the bottom, when you have to make decisions daily about which essential bill doesn’t get paid, you know you have to make a systemic change. I found that myself. I couldn’t even pay what I call my Category 1 bills (rent, food, power), never mind debt repayment or anything approaching luxury – like transport, insurance, or even doctor’s bills. Despite applying for about 120 jobs, I was unable to get one. I found myself juggling finances on a daily basis.

In New Zealand, we do have a benefits system, which to be honest is pitiful. I began my time on the benefit in a highly depressed state, suffering from mental illness. My health later improved, and I actively started searching for work, receiving the Jobseekers Allowance while I went on my long, unfulfilling search.

The amount I received each week didn’t even cover my share of the rent. WINZ (the agency who manages benefit payments in New Zealand) insisted that I went to compulsory job-seeking lectures to learn how to write resumes and covering letters. I didn’t mind this, despite having taught the equivalent material to school kids for more than 20 years, but I did have to find transport to them, despite that not being in my budget. I lived in a city then, with buses every half hour. If I had lived here in a country town with no public transport and no WINZ office, as I do now, it would certainly have been “challenging” to get to their seminars.

WINZ never actually helped me find any jobs, however. None of my 100 + job applications was for positions suggested to me by WINZ.

WINZ insists that most of your contact with them is via their website, and to gain access to that requires you carry a cell phone. Yet, WINZ considers both a computer, and a phone of any form, to belong in the luxury section of your budget, and they won’t fund them. As I write this, my flatmate as just received an email saying WINZ will no longer mail letters out – everything must be done by email.

Eventually, my faculties returned and I was able to look at the situation logically. There is only so much juggling finances you can do. My income would not increase while I was on the benefit. It seemed unlikely that I was able to convince employers that I was the ideal employee for them. I had already trimmed back my discretionary expenses. I was juggling essential bills each week.

Despite, as I say, WINZ not funding a computer, I was lucky enough to still possess one from previously. I had an online-gaming flatmate, who paid the internet account (another luxury expense, according to WINZ). I have always had skills when it comes to using a computer. I decided, that the only way I could break the cycle was to employ myself. I had found and altered, what was probably the only variable in my financial juggling act.

Alright, two years on, things are still bloody tough. I continue to find myself juggling finances – just not perhaps every week. There are times, and I admit this week is one of those, when I return to rock bottom, hovering on the edge of despair, wondering if I can fund a trip to my Tauranga doctor or not for some antidepressants. Things have not been helped by mother getting very sick, half the country away in Christchurch. I’ve had to make the very tough decision not to visit her. I simply can’t afford the fare, nor the time out from working, firstly to survive then to thrive. To add to the current fun, this house has just been sold and I have to find somewhere to live again. The current landlord has provided a possible option – but being behind in rent, I need to get that fixed before I end up on the street.

Yet, unlike those dark days on the benefit, I can still see that glimmer of hope.  There may still be some backtracking in living conditions yet if I can’t source some more money soon, but I at least know I have the capability to do so.

Reinvention can be a slow process. It can rise and fall like a bucking bronco. Yet, it is possible. You just need to plan, follow your action steps, don’t get totally lost in the problems of now, and make sure that you ultimately take more steps forward then backward. I do know however, I still seem to be forever juggling finances when there’s simply not enough money to go around.